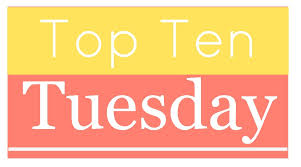 Top Ten Tuesday is a weekly meme hosted by The Broke & The Bookish Blog.

This week’s topic – Movie Freebie!!  Yay!  I love movies so I’m excited about this topic.  I’ve decided to do:

These are in no particular order.

Notting Hill.  I love this movie, starring Julia Roberts as a Hollywood star who stumbles into a British book store owner (Hugh Grant) and falls in love.  This movie has a fun, quirky cast and a fantastic story.  If you haven’t seen this one, you should watch it as soon as you can!

Sweet Home Alabama.  Reese Witherspoon stars in this romantic comedy as a fashion designer who becomes engaged to the Mayor of New York’s son and has to go back to Alabama to get a divorce from her husband.  This movie was Patrick Dempsey’s comeback as an adult actor.  I love this movie and watch it anytime it is on.

How to Lose a Guy in 10 Days.  This is one of my favorites on this list.  Kate Hudson stars as Andie Anderson, magazine reporter tasked with meeting a guy and doing everything wrong in order to lose him.  What she doesn’t know is the guy she meets, played by Matthew McConaughey, has his own motives for making their relationship work.  They had such amazing chemistry in this movie.  It’s such a great movie. 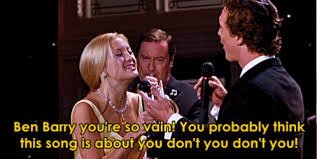 Better Off Dead.  This movie isn’t nearly as popular as it should be, because it’s amazing.  Lane gets dumped by his girlfriend Beth and decides he wants to die.  He has to deal with his strange mother who can’t cook, his weird little brother and his super bizarre neighbors, who are hosting a girl from France in their home.

10 Things I Hate About You.  A great teen flick starring Julia Stiles and the late Heath Ledger.  Stiles stars as a total feminist being raised by a single father who shelters his two daughters from life.  She meets Ledger’s character, a misfit, and sparks fly.  Lots of stars in this movie before the became stars.  Great flick.

Roxanne.  Another movie that is not as popular as it should be.  Steve Martin stars as a modern day Cyrano de Bergerac, the man with the very large nose.  A young woman named Roxanne moves into town and he is smitten with her, but believes that he has no chance due to his looks.  Fantastic movie.

The Wedding Singer.  Another one of my favorites on this list. Adam Sandler stars as Robbie Hart, a wedding singer who gets left at the altar on the day of his wedding.  He meets new waitress Julia, who is engaged to a Miami Vice wannabe douchebag named Glenn Goolia.  Robbie agrees to help Julia plan her wedding to Glenn…you can guess what happens next.  Fantastic music in this 80’s themed movie.

Sleepless in Seattle.  This movie is just beautiful.  The story of Sam, a young widower with a young son named Jonah who moves to Seattle from Chicago after his wife’s death.  His son calls into a “Dr. Laura” type show, and Annie, in New York hears Sam’s story and starts falling for him.    Amazing cast and amazing story.

Clueless.  One of my all time favorite movies.  Clueless is the story of 16 year old Cher, a girl with wealth in Beverly Hills with a keen fashion sense.  A new girl moves to school and Cher makes it her mission to find Ty a boyfriend; what Cher doesn’t realize, she is finding love for herself.  Great music, great cast, great movie.

Tootsie.  Another of my all time favorite movies.  Dustin Hoffman stars as Michael Dorsey, an actor in New York who can’t find work.  He goes to desperate measures, and dresses as a woman, names Dorothy Michaels, and lands a lead role in a soap opera (this was the early 80’s when soaps were huge).   This cast was amazing, and the story is great.  A great movie.

What are your favorite romantic comedies?