PLEASE NOTE:   This post will contain spoilers about last night’s episode of This is Us.  If you’re reading this post, I’m going to assume you’ve watched last night’s episode.  If you haven’t, you may want to come back and read it later.  You’ve been forewarned:)

So, instead of typing up a lengthy post about the content of last night’s episode, titled The Big Day, I’m going to briefly reflect on my thoughts on said episode.

This episode, set entirely in 1980, focuses on Jack and Rebecca, who are awaiting their triplets.   It’s Jack’s birthday, but Rebecca is on a rampage about everything and anything.  And being an uber bitch about it.

As a mother, I can totally understand hormones – and I only carried one child at a time.  How she acted didn’t bother me – it’s typical.  You also get “pregnancy brain”, where you forget stuff.  Been there, done that.

Jack continues to amaze me as a character.  After Rebecca kicks him out of the house, Jack meets Miguel at a golf course, where Miguel offers to buy Jack golf clubs.  Some of the other dads talk about using golf as an excuse to get away from their families.  Jack will have none of that.  He gushes about how much he loves his wife, and promptly leaves to go home to her.

I’m still not sure what to make of Miguel.  The fact that he and Rebecca are together is pretty creepy.  Assuming Jack has been dead for around 10 years (Kate mentioned the 2006 AFC Championship game was the last game she watched with her dad), that’s pretty fast for someone to have remarried.  Or maybe I just don’t like Miguel and I’m looking for reasons to dislike him.  Could Miguel be a reason that Jack and Rebecca had marital problems?  Did they get together after he died?  So. Many. Questions.

We also got to see more of the amazing Dr. K, played brilliantly by Gerald McCraney.  Dr. K is struggling with the loss of his wife a year earlier.  He hasn’t gotten rid of her clothes or things.  He talks to her like she’s there.  His son visits, urging him to “move on.”  Dr. K lays into him, telling him there is no time table for grief.  He runs into a friend at the grocery store who offers to cook dinner for him (herself a widow).  Then there is the scene at the cemetery, where it looks like Dr. K might be giving up.  Until he gets the page about the Big Three.  That entire scene had me in tears.  So beautifully acted. 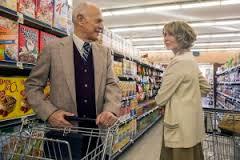 We also got a look into the life of firefighter Joe, the man who brought Randall to the hospital.  It turns out he didn’t bring the baby straight there – he brought him home to try to make a family with his wife, whom he can’t conceive children with.  His wife insisted that Joe take the baby to the hospital immediately.  But their story ended happily. 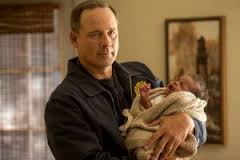 My favorite scene, though, was when Rebecca talked to the babies, telling them that she loves them very much and apologizes for the mistakes she knows she’s going to make.  Jack comes in at the end with a video camera, which he brought himself for his birthday.

Overall, this is probably my favorite episode yet.  This show is so beautifully written and acted.  It’s a shame it didn’t win any Golden Globes.