I thought I was helping a friend, but instead I only managed to get myself in a heap of trouble which left me with two options. Coach little league as part of community service…or face jail time.

So here I am…coaching little league, a project I wasn’t looking forward to—that’s until I see Stella at the field with her son. Unfortunately for me it takes a lot longer than I’d hoped for her to give me the time of day.

Yet, now that I’ve caught her attention, things are much more complicated than I thought. Who knew juggling a struggling friend, community service, a team bully and a girlfriend would be this hard?

But I won’t let it get me down. Someone once told me the secret to success, and come hell or high water I’ll show everyone around me that I……refuse to lose. 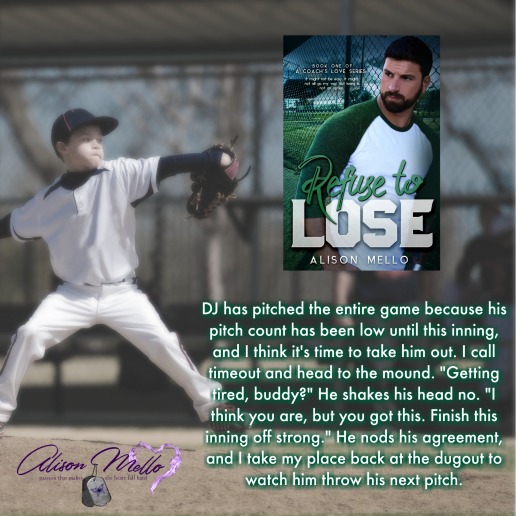 Alison has been writing for over a year now. Her debut book Finding Love (October 2015) was published by Siren Publishing. Her following books Needing Your Love (November 2015), Found My Love (December 2015), and Fighting for Love (January 2016) were also published with Siren to finish the Learning to Love series.

Her desire to see her books on shelves led to her next work Chasing Dreams (April 2015), now Club Thrive 1: Compulsion. She submitted it for publication with Limitless Publishing and was thrilled that it was quickly accepted. Excited to reach that goal, she moved on to the next series she had in mind and wrote Saved By a Soldier (June 2016), My Broken Soldier (July 2016), Forever My Soldier (August 2016), and A Soldier for Bella (September 2016). She continued writing adding the Once Broken series and she’s added to the Club Thrive series.

Alison enjoyed reading as a child and found her passion for it again in 2011 when E.L. James’ Fifty Shades of Grey was released. Her love of reading was re-ignited and she continued reading other books in the same genre. In the summer of 2015, she decided to give writing a try and two weeks later Finding Love was born. As soon as she finished the first book, she began writing the second book in the series. Her third book was finished by the time Finding Love had been accepted for publication. Alison discovered she has a passion for writing and has spent the last year meeting new readers and sharing the love she has for writing.

Married to her own real life hero, Alison lives with her amazing family in Massachusetts where she was born and raised. She loves having her own personal inspiration right at home and when she’s not writing she enjoys playing soccer, basketball, and football with her son.

Trystan is ex-military and working construction in West Virginia. Stella moved to town after her husband was murdered in New York City. She gets lucky and finds a job and a good friend in diner owner Misty.

Trystan is arrested for drunk driving, and he did it to save his very drunk and depressed friend from driving. The judge sentences him to coaching his grandson’s little league baseball team to avoid jail time.

Let me start by saving that I loved both Trystan and Stella. They were really great characters. Trystan was a really good coach, and someone I would want coaching my son. At the same time, there were parts of this book this didn’t feel authentic.

Trystan is able to convince some of the bullies on the team to change their behavior. While that’s a nice concept, it’s not likely something that would happen in real life. I know my son has not respected any of his coaches as much as these kids respect Trystan. It makes for a cute story, but again, doesn’t feel realistic.

I did like the “mom squad”. I’ve always been the mom to volunteer and help out, so I could relate to that part of the story.

My biggest complaint about this story was the sub-plot surrounding Trystan’s ex. It was so contrived and not at all believable.  Sophia was a horribly unlikable character, and it didn’t seem to make sense that all of a sudden, around 60% in the book, she would want Trystan back. The scene with her at the end was pretty ridiculous and off-putting.

The epilogue was nice, but I would have appreciated it being more in the future; it was only a few months down the road.

I did like the fact that the story was really focused on keeping Stella’s son close to his dead dad. Trystan was wonderfully supportive in that regard, and it made him so much more likable. Stella was also very good about talking to her son before jumping into things, both with the job and with Trystan. Proved she always put her son first, which I appreciated.

This was a really cute story, and I would recommend it.