BACK IN THE GAME
By Meghan Quinn
Release Day – April 30 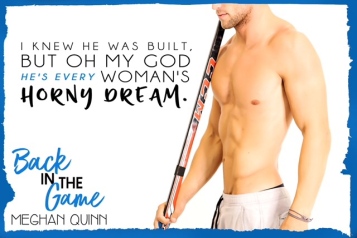 Single dad and hockey star, Calder Weiss has put his love life on the back burner for the past five years, raising his daughter and keeping up with the demands of his profession.

But all that changes the minute Rachel Perry runs into him in the most unlikely of places, right outside the men’s bathroom. Vibrant and enchanting, she captures his attention, making it impossible for him to walk away without scoring her number.

Their connection is immediate, their attraction palpable, and their relationship undeniable. But Rachel isn’t the only girl in Calder’s life which scares him, because Calder’s daughter already lost her mother. He doesn’t want Shea to lose someone close to her again, making Rachel’s task of breaking through Calder’s wall that much more difficult.

Born in New York and raised in Southern California, Meghan has grown into a sassy, peanut butter eating, blonde haired swearing, animal hoarding lady. She is known to bust out and dance if “It’s Raining Men” starts beating through the air and heaven forbid you get a margarita in her, protect your legs because they may be humped.

Once she started commuting for an hour and twenty minutes every day to work for three years, she began to have conversations play in her head, real life, deep male voices and dainty lady coos kind of conversations. Perturbed and confused, she decided to either see a therapist about the hot and steamy voices running through her head or start writing them down. She decided to go with the cheaper option and started writing… enter her first novel, Caught Looking.

Now you can find the spicy, most definitely on the border of lunacy, kind of crazy lady residing in Colorado with the love of her life and her five, furry four legged children, hiking a trail or hiding behind shelves at grocery stores, wondering what kind of lube the nervous stranger will bring home to his wife. Oh and she loves a good boob squeeze!

I’m a big fan of Meghan Quinn, so when I saw an opportunity to review one of her books, I jumped on that chance.

Back in the Game is different from the last series of hers I read (the Dating by Numbers series, which is AMAZING, if you haven’t read it). This book is about a hockey player named Calder Weiss (yummy), who is a single father to an adorable little girl. He dresses up as Wanda the fairy princess and even leaves his house dressed that way. That’s how he ends up meeting Rachel Perry.

The chemistry between Rachel and Calder is off the charts from the beginning. They have hilarious banter and texts before their first date, and oh my gosh, was their first date the most adorable thing I’ve read in a long time. I’m a firm believer that when you meet ‘the one”, you know right away. This book proves it’s true:)

Calder is a great dad. He always puts his daughter first, which I totally appreciate. Rachel is a kick ass school teacher who is hilarious and confident. You don’t read many female characters like her.

My only problem with the book was it wasn’t long enough! It was a novella, and I wanted more. To be honest, I wasn’t even mad there was not an epilogue (I was a little disappointed) but I loved these two characters so much. There was some “on ice” action, which I appreciate – I hate when you read a book about a hockey player with no hockey!

This is a super fun, quick read and I would highly recommend it.