Men have never taken me seriously. At 5’5” on a good day, they can’t help but look straight through me, or worse: right at my rack. So I prove them wrong. Usually with a swift kick to their golden jewels that sends them straight to the floor. That’s what they get for messing with a captain from the Israeli Defense Forces.
When my cousin offers me a gig for a bodyguard position with one of the richest families in the country, I jump at the opportunity. But when I meet the client, Lawrence Monroe… it doesn’t go so well.
So I tell him to go screw himself and as I stumble out of the room, I find Isabel, his adorable daughter getting her butt kicked in Wii boxing. I offer to teach her a few tricks and then suddenly Lawrence has a change of heart. That same day I move into his McMansion, into a bedroom the size of my entire apartment. Except there’s one problem: while I think I’m being hired as a bodyguard, he thinks he’s hiring a nanny. Yeah, annoying. But for the sake of his blue-eyed baby girl (and a sizable paycheck), I play along.
And while at first, I just pegged Lawrence as an over-protective father, I am beginning to get the feeling that Isabel and I are being watched. All my instincts tell me to follow my gut, but how can I trust myself when every time I am within a 10 foot radius of Lawrence, my body betrays me and I feel inexplicably attracted to this devoted single dad. There is something between us, lingering just beneath the surface. But he is American royalty and I am only here until this threat is neutralized.
After all, I can’t let myself fall for him. I need to focus on protecting his daughter and deciding what kind of life I want for myself. No, falling for a man like Lawrence Monroe would cost me too much. I have to defend my dignity.

I can hear the sincerity in his voice as easily as I can see it in his eyes. I turn away from him and look out the window, before he can see the truth in my eyes, of how much I want him, and how much that scares me.

When I turn my head to look back at him, suddenly, the back of this car feels even smaller. Is he closer? Or am I imagining it? Has all the air escaped, or is it just that being this close to Lawrence addles all my senses?
I don’t know what it would take for me to give myself to Lawrence, to give in to this temptation. But I know he would take a piece of my heart with him. It would be inevitable. The question now was, did I want to risk the heartache to have this one night with him? To be able to experience what it would feel like to have him inside of me, and have his chest pressed against mine, and our heart beats furiously beating in our chests as we explored, dominated and made love to each other. Would I be able to give my body to him, without giving him my heart?
Any other man and I would have been able to easily that question. With Lawrence, I’m not sure I can separate the two. And still, it’s a risk I want to take. At least for tonight. So when I drag my eyes up to his, to find them looking down at me, I suck in my lower lip and close my eyes.
Just for tonight. Give in to him tonight. If it’s not meant to be, there will be a sign from the universe.
When I open my eyes, I move my hand to cup his cheek. As my palm connects with his face, he inhales a sharp breath, as if my touch is enough to unsettle him the same way he has completely tilted my world off its axis. But tonight, I don’t want to overthink — don’t want to agonize whether he feels the same I want to do. In fact, tonight I don’t want to think at all, I just want to feel: Feel his lips on mine, his hands on my body.
“If we do this, it can only be tonight,” I tell him, still biting down on my lip hard enough now to draw blood. 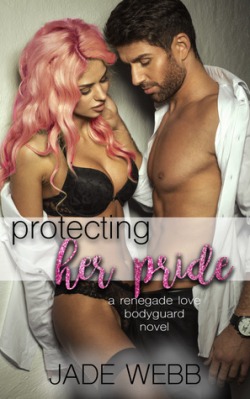 I haven’t read a book like this before – an Israeli woman who is a bodyguard agreeing to help out “American Royalty” as he’s having issues. Sounded interesting.

Yael (which I had no idea how to pronounce, btw) is a 24-year old former Israeli soldier who has moved to America to escape her controlling father. She has a hard time being taken seriously due to her size and the fact that she’s a woman. She is given an assignment to “nanny” for Lawrence Monroe’s daughter, who was approached at her school, in what Lawrence believes is an attempted abduction.

Yael has no interest in being a nanny, but wants to help Isabel, Lawrence’s daughter. She’s not impressed with Lawrence, having pegged him like most guys – someone who won’t take her seriously as a “bodyguard”. But when Lawrence sees Yael giving his daughter some self-defense lessons during a game of Wii Boxing, he changes his mind.

While I liked Lawrence, I didn’t love the story revolving his father and brother. In fact, his father was a pretty awful character. This storyline added to the drama of the book, but it was a little over the top and not entirely necessary.

Yael, while being a kick-ass soldier, is kind of a mess. She was raised by her father, who taught her to be a fighter and forgot to teach her how to be a person. She’s not girly at all and often feels out of place. She was really great with Isabel though, teaching her how to defend herself.

The ending was just ok. I didn’t hate it, but I certainly didn’t love it. There was NO EPILOGUE, which irritated me to no end, so I have no closure.

Overall, this was a pretty good, fast read.