Red Hatter Book Blog – “Their story is one of the most powerful and emotional stories I have ever read.”

Sheridan – “I think their story will stay with me forever!”

Jenn the Readaholic – “This book was absolutely fantastic.”

Christine Jalili – “This book completely gutted me but also left me feeling like they had so much love.” 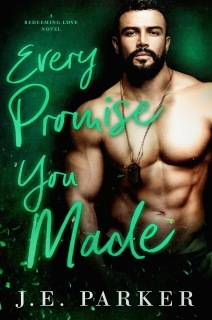 Two shattered lives. One final vow.
Hope
Growing up, I had everything.
A loving big brother, a great family and a happy life.
But then it all changed. Now, my entire world is shattered.
The only thing that still makes sense is how I feel about Evan.
I love him more than anything, but it’s not enough anymore.
I’m tired of chasing after him. Tired of being held at arm’s length.
I can’t live like this any longer.
Walking away will destroy me.
Yet what other choice do I have?
Evan
Growing up, my best friend’s sister was always around.
I took care of her, I protected her. She was my friend too.
Then one night she became more. So much more.
But then all hell broke loose.
I screwed up. I became the reason for her pain.
My mistake ruined everything.
Afraid of destroying what we have left, I keep her at arm’s length.
Fed up with my distance, she’s ready to end it all.
That can’t happen.
It’s time to face facts… Hope is mine. 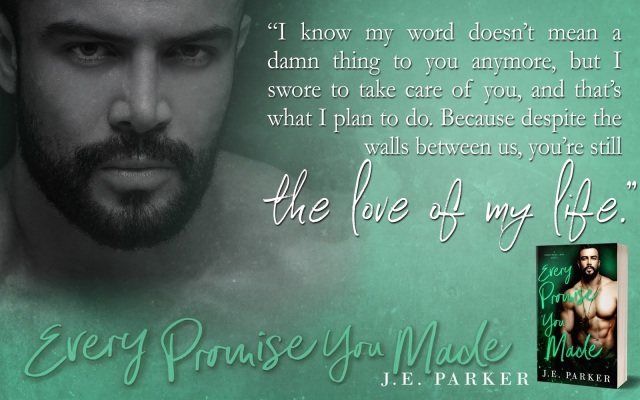 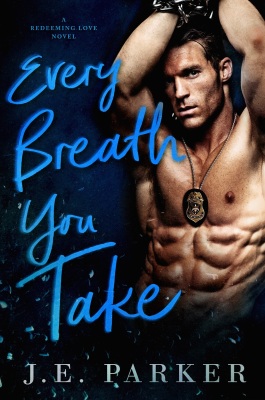 J.E. Parker is an American romance author who was born and raised in the great state of North Carolina. A southern belle at heart, she’s addicted to sweet tea, Cheerwine, and peach cobbler.
Not only is J.E. married to the man of her dreams (albeit a total pain in the rear), she’s also the mother of a herd of sweet (sometimes), and angelic (only when they’re sleeping) children. Despite their occasional demonic behavior and bottomless stomachs, J.E. loves her little tribe more than words could ever express.
On the weekends, you can find her sitting on the couch, cheering on (or cursing) her favorite football team, stuffing her face with junk food, and guzzling a bottle of cheap red wine.
When she’s not busy making sure her husband doesn’t burn the house down or acting as a referee for her fighting children, J.E. enjoys reading, writing (obviously), and listening to a wide variety of music. 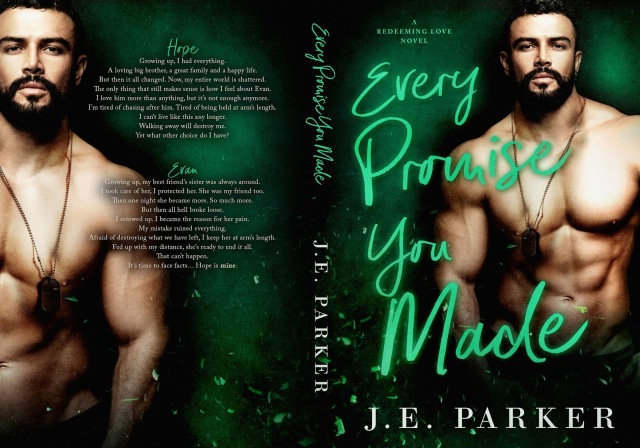 Wow, this book is deep! So many emotions and feels.

Every Promise You Made is the story of Evan Morgan and Hope Petersen, who have known each other forever. Evan and Ryker, Hope’s brother, have been best friends since kindergarten. They were inseparable. Ryker and Hope are extremely close, and Hope is always around. She’s always felt very close to Evan, and has been in love with him since she was 4.

Evan has been in love with Hope forever as well, but feels like he can’t act on it. The night before he leaves for the Marines, he finally kisses Hope and tells her that she’s his forever. Evan and Ryker had for Iraq where tragedy strikes, and it breaks both Hope and Evan.

Fast forward three years. Hope is now a social worker helping victims of domestic violence in Georgia. Evan lives there too, with Hope. He’s a security guard at the shelter she works at. Hope tries and tries to get close to Evan, but he constantly pushes her away. Until she tells him she’s done trying, and he decides it’s time to man up.

So, I didn’t read the first two books in this series (and I’m honestly kind of glad, because it sounds like they were rough [about abuse]). Not having read them, I wasn’t familiar with all of the characters, though the author did a very good job of filling us in. My biggest complaint, for lack of a better word, is there are SO many characters that it was often hard to keep up.

With that being said, the characters in this book were really great. Grandmama is particular was a hoot. Shelby was great, and the guys were too. I liked the characters, even when I had a hard time remembering who they were!

Back to the main characters – Evan and Hope. Evan was a very broken man. He felt a lot of guilt over what happened in Iraq, and struggled to overcome it. His growth over the story felt real and organic. He sought counseling. He tried to be a better man for Hope. He was a total alpha too, which I loved.

Hope was one strong woman. She spent her time helping women who had been abused, and really didn’t realize the impact she’d had on their lives. She became part of a big, extended family who loved her like she was born into it. And she never gave up on Evan, loving the big guy to the moon and back.

The last 10% of this book – wow. I teared up so many times during the ending. It was so beautifully written and hit you right in the feels. I loved how it ended, and will absolutely read the next book – who I think will be about Evan’s twin brother, Brantley.

While there were tears in this book, there were also quite a few laughs. It’s rare for an author to hit all the emotions, but Ms. Parker did just that. This is a really, really good book and I would recommend it.

17 thoughts on “Release Blitz & Review ~ Every Promise You Made”

I Knead You Tonight by Teagan Hunter. 3 1/2 stars
Catching Him by Aurora Rose Reynolds. 3 1/2 stars
Unexpected Fall by Kaylee Ryan. 4 1/2 stars. Very good book
Book’Em Piper by Danielle Norman. 3 1/2 stars.
Down too Deep by J. Daniels. 5 stars. Loved this one so much!!!
Enchanting Sebastian by Kristen Proby. 4 1/2 stars