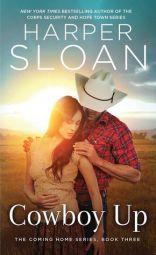 Title: Cowboy Up
Author: Harper Sloan
Rating: 4 out of 5 stars
Genre: Romance
Where I got it: Library

As the eldest Davis, Clayton has always tried to lead by example. He takes his job as head of the family businesses seriously, making sure the farm and auto shop are running smoothly—along with keeping an eye on his brother and sister. For him, there’s a time and place to let go of the control he holds with an iron grip. And with the way he grew up, coupled with disastrous end to his last relationship, he’s just fine with his quiet, solitary life.

Most of the time.

What he hadn’t counted on was cute, quirky, shy bookstore owner, Caroline Michaels. She’s the proverbial woman next door—well, the next town over, that is. Caroline hasn’t lived an easy life, but after escaping an abusive ex, she’s finally living it for herself. The last thing she ever expected was a one-night stand with Clay Davis, a night she can’t stop thinking about.

So when she falls on hard times and Clay comes out of nowhere to her rescue, she realizes just how impossible it’ll be to stay away from him. Now all she has to do is convince him to live a little…

Will Clay be able to give up the reins and finally settle down? And, more importantly, will Caroline muster enough courage to lasso him up?

This is my second Harper Sloan book this week, but unlike the first, this is the finale in a series.

Clay Davis is the oldest of the Davis siblings and runs the family ranch. He’s a workaholic and hasn’t been in a serious relationship for a while. One night, he’s in Hazel’s, a local bar, and he meets a woman who “wants to be bad”. They end up going to a motel for a night of passion, but the woman doesn’t know who he is. The whole night was spent in darkness.

Caroline Michaels can’t get her “dark cowboy” out of her mind. Imagine her surprise when she realizes it Clay, someone she had a crush on when she was younger. Once Clay sets his eyes on Caroline, he’s not letting her out of his sight again.

Caroline was in an abusive relationship and had a really shitty childhood. She has some real insecurities, and can’t understand what a man like Clay sees in someone as “plain” as her. But Clay is hearing none of that. He’s decided he wants her “bad” all the time.

Clay has taken care of his brother and sister forever, but they are both married and on their own, so he has no one to take care of. When Caroline starts having problems in her life, Clay of course steps in and offers to help her out. Caroline resists at first, because she’s stubborn and proud.

Caroline became a much stronger woman over the course of this book, thanks to Clay’s love and affection. Clay was the ONLY alpha male in this series and took charge when it came to Caroline. Clay also changes – he becomes less focused on work and more focused on his happiness, which involves Caroline.

The drama at the end was a little over the top in my opinion, but it didn’t take away from the story.

I loved the epilogue – it was the perfect ending to the series. I would recommend the series to anyone.

2 thoughts on “Cowboy Up by Harper Sloan”