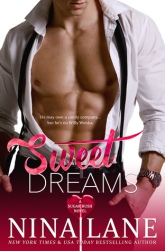 Sugar Rush Candy Company CEO Luke Stone is a devoted businessman who doesn’t do relationships. He does short-term affairs with clearly defined rules. But when a sexy bohemian angel propositions him in a bar, Luke is tempted to want more.

Polly Lockhart is horrified when she wakes the morning after her twenty-third birthday to realize she made a fool of herself with a sinfully delicious man. She tells herself she doesn’t have time for romance anyway, as she’s fighting to keep her mother’s beloved bakery afloat and finish her culinary studies. That all changes when her class tours the famed Sugar Rush headquarters, and Polly collides with her dream man again.

As she succumbs to their hot attraction, Polly soon realizes her bakery isn’t the only thing that needs saving. Luke, driven and unyielding, will burn out unless someone convinces him to taste the sweetness of life. But can Polly remember this sugar rush is only temporary?

I got this as an Amazon freebie, was in between ARC’s and waiting for the new R.S. Grey to come out, so I thought I’d give this book a try.

Polly’s life was in a rut – she was dating a boring guy who never went out (sounds like my first serious boyfriend, whom I’ve dubbed the “world’s youngest coach potato”). Her friend tells her to get out and have some fun. At a bar, she gets drunk and meets Luke Stone, kisses the crap out of him, then proceeds to puke all over his shoes. She’s mortified.

Polly’s also in a culinary class (she owns a bakery) and her class takes a field trip to Sugar Rush, a local candy company. While on a tour, she comes face to face with the man she puked all over – and he’s happy to see her again.

Polly and Luke’s story was cute, but man was it LONG. This book could have been one hundred pages shorter and it would have been much more enjoyable. Way too much inner dialogue on both sides (especially since the story was told in the third person).

There were a few side stories I didn’t really care for – one involving Polly’s sister, and one involving Luke’s aunt. I liked Luke’s dad Warren, and his brother Evan, who the next book is about – but I’m not sure I liked them enough to read on. I’ll have to see.

This was a “sweet” story. There wasn’t an epilogue, which was a bummer, but I enjoyed the ending. Luke’s character development was much better written than Polly’s as well. Overall, the story was just ok for me.