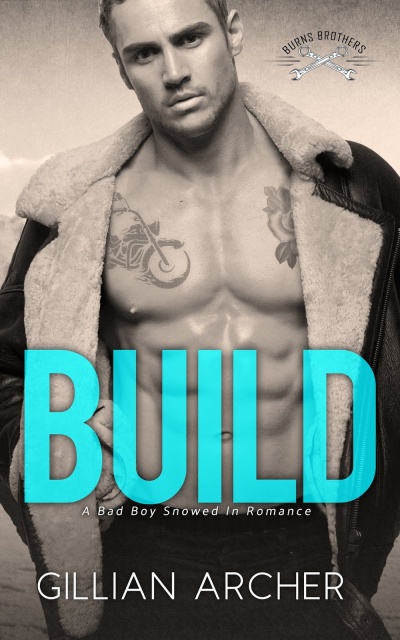 Title: Build: A Bad Boy Snowed In Romance
Series: Burns Brothers #1
Author: Gillian Archer
Genre: Standalone Contemporary Romance
Release Date: January 29, 2019
Blurb
Welcome to Bad@ss Builds where the motorcycles are as sexy as the brothers building them.
Austin Burns:
I thought she wasn’t real the first time I saw her. To be fair I was a hungover mess when I woke up and looked into her gorgeous eyes. After getting the second worst news of my life—that my father would be paroled soon—I’d escaped to my buddy’s posh cabin near Lake Tahoe. Now the maid with the gorgeous eyes is snowed in with
me, and I wonder if she might be a better distraction than the mountain of
booze I’d planned on drinking. She’s curvy in all the right places, and the
snow is falling faster.
Rachel Tannenbaum:
As a single mom, I don’t have time for men, especially irresponsible tattooed bad boys like my ex. But Austin is hot. And sexy. And stuck here in the cabin with me. I can’t say
no to a fling with this bad boy, especially since Austin is so gorgeous and
awkwardly sweet.
One night becomes two, and I don’t know if I can risk my heart—and my little boy’s—if Austin wants it to become more when we get through the snow and back to reality.
ADD TO GOODREADS

Excerpt
I’d just straightened up the pile of mats when a scraping sound caught my attention. Raising the blinds, I looked out the window and saw Rachel standing in the middle of the road, shovel in hand, pushing the snow into big piles. She’d got about ten feet
of road cleared in addition to her car.
Did she really think she could plow the fucking road between here and the highway? It
was miles of road!
“Son of a bitch.” I ran out of the room. Three steps later, I almost tripped over Blue in
the hallway. He’d taken up a post between me and the doorway, almost like he
couldn’t decide who he should be guarding. “Hey, boy. You okay?”
Blue sat up with a whine and swung his head toward the front door.
“Yeah, I think we gotta talk some sense in her. She can’t plow the fucking road all by
herself. Come on.” I grabbed my coat next to the door and pulled it on over my
naked chest. My shirt was balled up somewhere in Cole’s home gym. I shoved my
bare feet into my boots next to the door and half-assedly laced them up. Blue
whined next to me, urging me to hurry. I ripped open the door, and Blue bounded
out, with me close on his heels.
“What the hell are you doing, woman!” I shouted before I met up with Rachel.
She glanced at me then bent down to pet Blue. “What does it look like?”
“It looks like you’re fucking insane. You do know there’s like five miles of road between us and the highway, right? Are you planning on plowing the whole fucking thing by hand?”
“I have to do something!” Rachel waved an agitated hand as she stood back up to face me. “I can’t just sit here and wait for someone to call or show up. I have people
waiting on me—my family is counting on me.”
“You think I don’t know that? You think the same fucking thing isn’t happening to me right now? I was supposed to be at work today too. Our scariest fucking client is
expecting a bike delivery today, and I’m not gonna be there to stand between him and my brother. That’s my job! That’s what I’ve done my whole life, and today I’m not gonna be there. I won’t be there to protect him.”
Rachel stared back at me with wide eyes, and her mouth opened and closed like a fish.
I sighed as some of my anger melted away at Rachel’s bewilderment.
I hadn’t meant to reveal so much. My shit was my shit. No one else needed to know what was really going on in my life—least of all a piece of ass I’d hooked up with
for a night. I just had so much anger pent up. Booze hadn’t helped. Exercise
hadn’t helped. Really the only thing that’d worked was when I had her naked and
under me, but that’d never happen again.
I needed to get my shit under control.
“Look, I’m sorry, okay?” I reached over and gently took the snow shovel out of her hands. “We all have shit—that’s all I’m saying. Well, that, and there’s no way either
of us is going to be able to dig our way out of this mess. There’s too much
road between us and the highway. It’s dangerous. We’re better off waiting until
the plow comes. I don’t know where the hell Cole’s business manager is, but he
still hasn’t called me back. If you’d like, I can call around and see if I can
find another service.”
Rachel bit her lip and looked down the long, snow-covered road, her brow wrinkled.
“I’ll even pay.”
Rachel’s eyes shot to mine. “It’s not the money that’s bothering me. Well, it is, ‘cause
I can’t afford it, but I’m worried about the weather. There’s supposed to be
another system moving in this afternoon. If we can’t get out of here by noon, I
doubt you’ll find another outfit willing to come out in the middle of another
storm. We could be trapped here overnight again.”
I nodded slowly. “I’ll get on the horn and see if we can get you home to your little boy
sooner than later.”
“Thank you.” 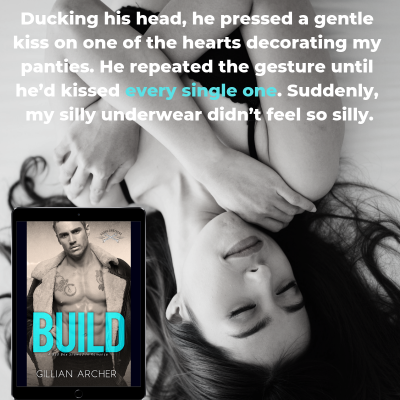 Gillian has a bachelor’s degree in mining engineering but
prefers to spend her time on happily ever after. She writes the kind of stories
she loves to read—the hotter the better!
When Gillian’s not pounding away on the keyboard, she can be
found surfing the couch indulging in her latest reality tv fixation, baking
something ridiculously tasty (and horrible for her waist line) or snuggling
with her husband.
Home is currently in the wilds of Nevada with her amazing
husband, ridiculously cute kiddo, and goofy dog.
Author Links
WEBSITE
FACEBOOK
TWITTER
INSTAGRAM
GOODREADS

I have been off to a rocky start this year reading wise. I have not read a book that has wowed me, but Build by Gillian Archer is for sure the closest I’ve come so far.

Austin Burns is having a rough go. He’s just gotten word that his father is being paroled in three months – and he freaks out. So much so that he takes off for his friends cabin in Lake Tahoe. Where he manages to drink himself into a stupor.

Rachel Tannenbaum is a single mother working two jobs to make ends meet. She cleans houses during the day, and ends up at the same house as Austin. While she’s cleaning, a massive snow storm hits, and they are stranded together. Rachel freaks out a little, knowing she can’t go see her son, but Austin helps her get through her anxiety.

I’m sure you can figure out that they end up hooking up. Though there are lots of points during the story where Austin acts like a total ass hat. Rachel was a good character. She’s trying to take care of her mother, who is paralyzed, and her three year old son, Wyatt.

I also liked the back story with Austin’s brothers, Ryan, Nathan and Dylan, who are likely all to get their own stories. The dynamic really felt authentic. All the swearing and men being men. I enjoyed it.

Two things I didn’t enjoy – Austin’s fleeing every time things got rough, and Rachel’s inability to trust. I have trust issues, so I get them to an extent, but I also know that at some point, you just have to let things go.

Another issue I had was the issue surrounding Austin’s father. There was a lot of drama surrounding the storyline, but there was no closure. It was kind of like the author forget the father was paroled.

I wish the epilogue would have been a little further out in the future, and given us a little more closure, but I guess we are going to get three more books, so we will know what happens with Rachel and Austin going forward.

Overall, this was a very enjoyable book and I would recommend it.