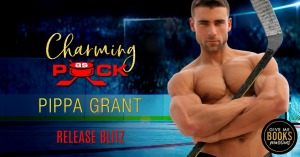 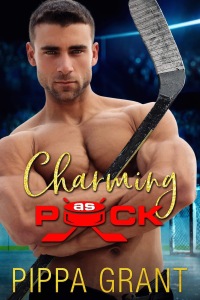 Blurb
The man could charm the panties off of a nun…Nick Murphy. Hockey god. My best friend’s big brother. My friend-with-mindblowing-benefits.

of the month club. The man I’ve been secretly in love with for years.And total ass.I am so done with him.Except there’s one small problem.Now that I’ve cut him off, his hockey game is in the toilet. He’s convinced I’m

his good luck charm, and he wants me back. But only for his game.I’ll be strong. I will. I’ll resist.Asses don’t change their stripes.Or do they?This plan would be so easy if the man wasn’t Charming as Puck…Charming as Puck is a romping fun romance between a hockey player and his sister’s best friend, complete with farm animals, over the top birthday

presents, and Berger Twin sightings. This romantic comedy stands alone with no cheating or cliffhangers and ends with a pucking awesome happily ever 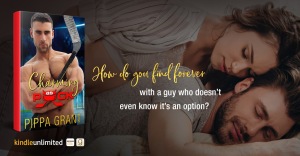 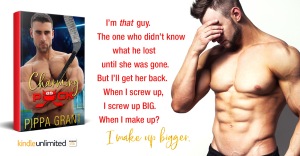 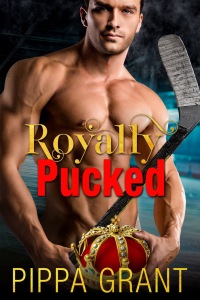 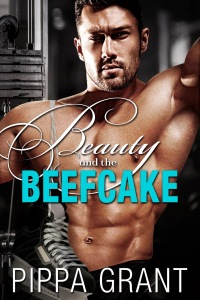 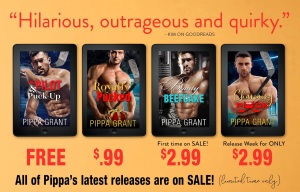 Pippa Grant is a stay-at-home mom and housewife who loves to escape into sexy, funny stories way more than she likes perpetually cleaning toothpaste out of sinks and off toilet handles. When she’s not reading, writing, sleeping, or trying to prepare her adorable demon spawn to be productive members of society, she’s fantasizing about chocolate chip cookies.Books by Pippa GrantMister McHottieStud in the StacksThe Pilot & the Puck-UpRoyally Pucked

I’m a sucker for a best friend’s brother book, and add the fact that he’s a hockey player, I’m SOLD!!! So I was excited to read this one.

Kami has had a friends with benefits relationship with Thrusters goalie Nick Murphy for 8 months. Kami wants more, but Nick is pretty clueless as to the fact that he has feelings for Kami. The morning of Kami’s 30th birthday, one of Nick’s teammates pranks him by leaving a cow in his house. Kami is a vet, so he calls her to deal with the cow. She gets to his house and decides that after realizing Nick has forgotten it’s her birthday, that she’s done. She doesn’t take care of the cow. She leaves it and it makes a big mess.

Once Nick realizes Kami is done, his game starts to suffer. He also realizes that he’s in love with her, but for a while, Kami is not budging. He does some really cute things to win her over, but she doesn’t budge. This kind of annoyed me. Nick was trying so hard, and she was being a little mean, which was out of character for her.

The cow, Sugarbear, ends up playing a hilarious role in this story. I loved her. I also loved Kami. She was strong and funny, and so sweet. Nick was hilarious as well. Watching him change over the course of the book was nice. He realized he really wanted Kami and went to great lengths.

I haven’t read any books in this series, but that’s going to change. This book was fun, and I love hockey, so I’m shocked I missed it.

I would recommend this book.