Title: One Last Chance
Series: Finding Love in Scotland #1
Author: Gina Azzi
Genre: Contemporary Romance
Release Date: March 25, 2019
Blurb
There’s only one
thing harder than sharing office space with Finn Anderson: keeping my mind off
him.
Weeks ago, he kissed me senseless and walked away. But my
best friend’s cousin is back – and worse? He’s one of the only people I know in
Scotland.
With his seductive Scottish accent and alluring blue eyes,
one look from Finn sets my heart racing. Exchanging playful quips at office
happy hours and smoldering glances through conference room doors proves that
our chemistry is undeniable. Our connection, irrefutable.
But I can’t fall for Finn. Even though I’m halfway there.
He doesn’t do commitment or relationships.
Last month, I thought we were done. Over.
Turns out we’re just getting started.
ADD TO GOODREADS

Excerpt
When I get
to the door, I turn quickly, and she stumbles back a step, as if I’ve caught
her off guard. I reach out to steady her, and my hand lingers on her shoulder,
my fingers brushing against the inside of her arm.
She inhales
sharply, her eyes widening as they flicker over my lips.
Damn it.
Everything
between us is too much, too real.
“Daisy.” My
voice is low, and I struggle to control the torrent of emotions that flood me
as I stare at her upturned face. I want to pull her flush against me and kiss
her senseless as much as I want to turn around and leave. Memories from
Christmas flood back. I don’t know what’s going on between us. I had
said the words to her on Christmas Day and yet, they ring true now.
The tension
between us crackles with energy as I drink in her multi-colored eyes, so bright
and intense, I could drown in them. Open desire mixed with anticipation
flickers across her expression as she boldly meets my gaze.
Mesmerized
by her, conflicted by the emotions running through me, my hands clench into
fists. My fingers itch to wrap in her hair, my mouth begs to cover hers. Hell
yes, I want her. But I respect her too bloody much to make her one more girl in
my long list of one-night stands. Besides the obvious reasons why Daisy and I
shouldn’t hook up – we now work together and she’s Sierra’s best friend – she’s
also younger, more impressionable, and idealistic. I’m not the man for her, and
I never will be, which is why I force myself to lean forward and brush a casual
kiss across her cheek. “Make sure you lock the door behind me.”
I hear a
small catch in her breath but when I pull back, she regards me carefully. Her
face impassive, her posture stiff, she holds the door open. “Night, Finn.
Thanks again.”
“See you,
Dais.”  I step into the hall and walk
down the flight of stairs, pausing until I hear the deadbolt latch. Sighing, I
scrub my palm over my face. What the hell was that? Blowing out an exhale, I
can still smell the vanilla from her shampoo and feel the soft, smooth skin of
her cheeks.
I couldn’t
forget about Daisy if I tried.
And trust
me, I’ve tried. 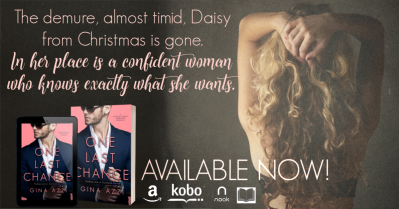 Gina Azzi writes Contemporary Romance with relatable,
genuine characters experiencing real life love, friendships, and challenges.
She is the author of The Kane Brothers Series, The College Pact Series
(re-launching summer 2019), and Corner of Ocean and Bay. All of her books can
be read as stand-alones.
A Jersey girl at heart, Gina has spent her twenties
traveling the world, living and working abroad, before settling down in
Ontario, Canada with her husband and three children. She’s a voracious reader,
daydreamer, and coffee enthusiast who loves meeting new people. Say hey to her
on social media or through www.ginaazzi.com.
Author Links
TWITTER
INSTAGRAM
FACEBOOK
WEBSITE
NEWSLETTER
PINTEREST

Daisy Kane moves to Scotland after graduating college, leaving her family behind, to start a job working at her best friends family’s PR business. It all sounds great except for one thing – Finn Anderson.

Daisy has a massive crush on Finn, and on Christmas, Finn kissed Daisy and walked away, leaving Daisy confused.

Daisy was a cool chick, and I loved her family. I feel that you needed to read the other books in the series to know what happened at the beginning of the book.

Finn, with his Scottish accent, was quite swoon worthy. He had some self doubt where Daisy was concerned. He had been in a relationship that scarred him badly and he didn’t want another relationship. Even with Daisy, whom he clearly wanted.

The chemistry between Finn and Daisy was off the charts. This was overall a good read. I just wish I had read the other books in the series first.

Sawyer by Samantha Whiskey 4 ⭐️
ARC of Unexpected Odds by Kaylee Ryan 4 ⭐️
🔥🔥 HOT NEW RELEASE 🔥🔥 Stay With Me by @leacollauthor is LIVE!! #OneClick today! We were high school sweethearts until she left without a backward glance. Now Lucy Perry’s back and more beautiful than ever. I want to stay angry with her but I can’t. I want to resist her but it’s impossible. She wants a fling but I want forever. I’ll take her on a trip down memory lane—the drive-in movie theater, picnics on the beach, and a boat ride to our favorite spot. She’s going to fall in love with this town. She’s going to fall in love with me. There’s no way she can walk away from me twice. I never thought I’d be back in my hometown. Then I lost my job, my apartment, and I moved back in with my parents. I told myself it’s only temporary but I have to face everyone I left behind—my family, my friends, and Wyatt Carter. He wasn’t the reason I left but he was the reason I never came back. He’s no longer the sweet easy-going predictable guy I dated. He’s an intriguing mix of cocky, grumpy, and bossy which is sexier than the way he fills out his park ranger uniform. I can’t resist him anymore than I could when I was eighteen. And I don’t want to. I want to explore our chemistry but he wants a commitment—the one thing I’ve never been able to give him. He thinks the two blue lines change everything but he’s wrong. Photographer: Wander Aguiar Cover Designer: Laun Studio PURCHASE LINKS: Universal: https://books2read.com/u/4j2KjD Amazon Universal: http://mybook.to/StaywithMe Kobo: https://books2read.com/u/4j2KjD Nook: http://bit.ly/2vG1J77 Apple: https://books2read.com/u/4j2KjD Add to your Goodreads TBR: http://bit.ly/STM_GR GIVEAWAY To celebrate the release of Stay With Me, Lea Coll is giving away a $25 Amazon gift card. Head to her Facebook page to enter: https://www.facebook.com/LeaCollAuthor/ #leacoll #secondchanceromance #availablenow #bookobsessed #needtoreaditnow #booknerdigan #bookstagram #wildfiremarketingsolutions
Currently reading Enticing Liam by Kristen Proby
Tacker by Sawyer Bennett 5 ⭐️
🔥🔥 COVER & TITLE REVEAL 🔥🔥 It’s HERE!! Check out Logan Chance’s HOT cover!! Never Kiss a Stranger is coming April 7th!! You will love this hilarious enemies-to-lovers romantic comedy featuring a feisty wedding planner and a sexy mysterious hero. Add to your TBR today! Kiki Ellis Atwood is the devil. Ok, maybe that’s too harsh. Ellis Atwood is ruining my life. First, he demolishes a perfectly good wedding trellis. Second, he destroys a gorgeous doggie wedding that I spent ages planning. (I kid you not.) Third, he makes me feel all warm and fuzzy, and that is not ok. I prefer the cold and harsh way my fiancé makes me feel so much better. (wait, that didn’t come out right.) Fourth, and there is a fourth, he gets me all wound up and flustered. And last, when he unexpectedly kissed me it made me forget my own name, or the fact that I’m getting married...in a month. Please someone help me out. I’m a mess. Worst part is, Ellis isn’t the bad guy I first thought he was. And being forced to spend time with him is making me realize that he needs my help more than anything. So what’s a girl like me to do? Ellis I’m only in town long enough to figure out a plan with my brother on how to save our brewery from the awfulness that is my father. Oh and be in a wedding. Where I may or may not be crushing a little too hard on the bride-to-be. (spoiler alert, I'm crushing hard.) She’s really cute. Like seriously. And she has the cutest job, she’s a dog wedding planner. (I kid you not.) I can see why Henry loves her. I can see why everyone loves her. I can see why I’m falling for her. I’m usually not a relationship-type guy. Call it picky or whatnot, but usually I get bored easily. So, my plan is simple. Spend as much time with Kiki (soon to be Faniki, I know) and hopefully get bored with her adorkable smile and sexy legs that go on for miles. Then, I can save the brewery, be the best man of the wedding, and get my butt back to Chicago and away from the happy couple. Add to Goodreads ➜ http://bit.ly/NKAS_LC READ THE EXCERPT NOW ➜ https://www.beardedgoatbooks.com/nkas-title-coming-soon #LoganChance #EnemiesToLovers #RomCom #WildfireMarketing #NeedToReadItN