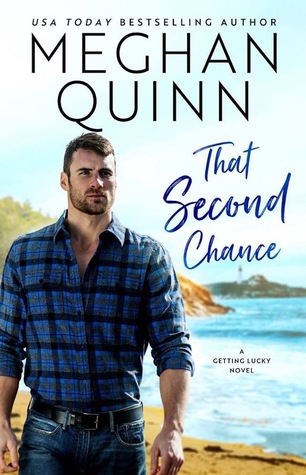 But it only took one rowdy night with my brothers to flip my world upside down. One unlucky encounter saddled us with a family curse and the promise of doomed relationships. I laughed it off immediately. “Yeah, right,” I thought. “A love curse. Ha!”

Boy, was I wrong.

Word spreads quickly in a town like mine; rumors about that night soon made us the most eligible yet untouchable bachelors in Port Snow, Maine. As a subject of endless gossip and speculation, I could kiss my dating life goodbye.

It would have stayed that way if Ren Winters, the new girl in town, hadn’t crashed into my life. Brave, beautiful, and smart—her vivacious thirst for a fresh start has given me hope that maybe, just maybe, I can have one too.

Everyone wishes for that second chance . . . but could this really be mine?

I’m a big fan of Meghan Quinn, so I was excited about a new series, especially a series abut 4 brothers, which is right up my alley.  Add in a picture-esque setting, and you have a winner.

Griffin Knightly is the oldest of his four brothers, all who hail from Port Snow, Maine. Years back, Griffin and his brothers went to New Orleans to celebrate a birthday, and they came into contact with a palm reader, whom they insulted. She then put a “curse” on them – which they ALL believe to be true, Griffin especially. Tragedy strikes Griffin, and he decides that he is no longer going to open himself to love.

Ren Winters moves to Port Snow to start fresh, and get away from her helicopter mom. She’s 28. And has a helicopter mom. Anyway, her first day in town, she gets into a little accident, thanks to a moose. Griffin, who is a volunteer firefighter, saves Ren from her car. Thus begins their friendship – it also turns out they are neighbors.

I have to admit that the “curse” aspect of this book was a little annoying. Sometimes bad things just happen. Griffin so deeply believed in this curse, that he closed himself off to love and he is only 30!

I also did not love how smothering Ren’s mom was. She was an only child, so I get that, but she’s a 28 year old woman. Come on.

I loved the rest of the Knightly clan, and all their hilarious meddling. I can’t wait to read the next books (I’ve already downloaded #2).

The feel of the town, which was small, felt real and was fun to read. Overall, I enjoyed this book and would recommend.

4 thoughts on “That Second Chance by Meghan Quinn”